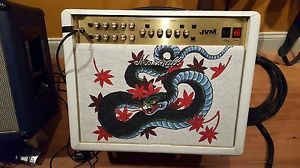 Back to the main page Back to category Marshall JVM215C

The color tape is for my FX pedal loom, marks the FX loop and foot switch. (took it off)In a nutshell, the Marshall all-valve, 2-channel JVM215C is a 2-channel, 50W version of the most versatile Marshall amplifier ever made, the JVM410C. Each of its 2 channels are completely independent of each other, and they boast 3 Modes, all 6 of which are footswitchable and feature their own unique gain structure. It makes the JVM 2-channel effectively 6 Marshalls in one!The JVM215C has studio-quality digital reverb with a level control for each channel. This is also footswitchable, as are the amp's two Master Volume controls and the Series/Parallel effects loop. Resonance and Presence are equipped with master controls.An ingenious footswitch (UK patent pending) and the fact all the amp's switching (channel/modes, Reverb, Master Volume selection, FX loop) can be done via the 4-way footswitch which has LEDs and memory, plus it connects to the amp via a regular guitar cable. You put the amp in a memory mode and select the swtch setting, ( pre amp / chanel, reverb, FX loop and which of the two master volumes) hold the button down for 5 seconds and it is remebered. you then have 4 distictive settings for your amp, great for live shows.
the XLR output sounds nearly the same as micing the amp, i would do live shows recorded with a mic and overdubs with the direct out!From the cleanest clean to the filthiest distortion ever found in a Marshall and all points in-between, the JVM215C all-valve combo will give you whatever tone you need right when you need it.All-valve 50W combo amp
5 x 12AX7 preamp tubes 2 x EL34 power tubes
12" Celestion speaker
2 totally independent, footswitchable channels
Each channel has 3 footswitchable modes
Footswitchable, studio-quality digital reverb
Independent reverb controls for each channel
2 footswitchable master volumes
2 FX loops, one series, and one parallel
Parallel FX loop is footswitchable on/off
Speaker emulated XLR output
4-way footswitch (with memory) supplied
All switching can be done via MIDI
Made in England
GREAT SOUNDING AMP, Great Price look at the others!