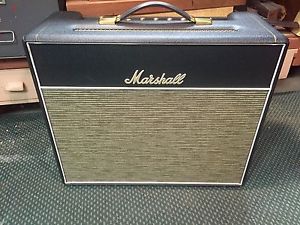 Back to the main page Back to category Marshall 1974X 1

Marshall 1974X Hand Wired Series Amplifier- Modified by Ben Fargen of Fargen Amplification    Up for sale is my personal Marshall 1974X 18 watt Hand Wired Series combo amp. I've owned it since new, purchasing it from The House of Guitars in Rochester, NY in April of 2005. I've been its sole owner & have gigged with it frequently since I first bought it. The reason I’m selling it is I am now in a band that plays original music and the "Les Paul through a Marshall" is not the sound for this ensemble, so regretfully, I’m selling it, as it’s a pity to have such a great sounding amp sit unused. I am also funding a vintage sports car project & all unused music gear must go.   Specs: The 18 Watt 1974X is a re-issue of the fabled 1974 dual channel, all-valve combo, produced between 1966 and 1968. Just like the original, the 1974X is hand soldered, with an aluminum chassis. Its two-channel design is straightforward and effective – just volume and tone controls on channel one and volume, tone, speed and sensitivity on the Tremolo channel. This second “tremolo” channel has been modified by Ben Fargen of Fargen Amps on this example, a $600.00 upgrade! With its lower Wattage, the 1974X power valves will overdrive sooner and with less shear volume than an amp of higher power. This means that the 1974X produces harmonically rich and sensitive, vintage Marshall tones at volumes that are usable in clubs and medium sized venues without killing everyone in the room. That said, flat out it still packs quite a punch & can drown out a drum set, no problem! The special 12” Celestion® G12M-20 Greenback in the 1974X has been ‘aged’ to get as close as possible to that vintage, worn in, ’60s vibe. It is the original speaker to this amp & the tone is sublime!   Modifications: This particular Marshall 1974X has been modified by Ben Fargen of Fargen Amplifiers of California. Ben Fargen modded the tremolo circuit only, at my request, to remove the tremolo circuit and add a “post phase inverter" Master Volume, true “treble mid & bass” controls to complement the existing volume control. It being a two channel amplifier, the original non-tremolo channel is left untouched. I did this so the amp would have much more versatility & flexibility on the modded channel & the mod basically mimics a Reinhardt 18, which is an exact copy of a Marshall 1974X, but with a modded channel exactly like I had Fargen amps install on this Marshall. Reinhardt Amps are no longer in production and are highly sought after, especially the Reinhardt 18! You can always plug into the stock channel to get that cleaner Marshall tone whenever you desire! ·         Modified Channel (Tremolo Channel) o   Tremolo circuit removed o   The circuits below were installed in its place §  Post phase inverter Master Volume Control §  True Bass Control §  True Mid Control §  True Treble Control §  Stock Volume Control ·         Stock Channel o   Volume Control o   Tone Control     Condition: This Marshall 1974X is in very good shape, it being 11 years old. I always take great care of all my equipment, both guitars & amplifiers. It has been maintained by local amp guru John Nau of Nau Amplification. It has been re-tubed with J&J tubes throughout within the last year, and having very little time on the amp since then, as with my current band, it’s not my primary amp anymore. The tolex & grillecloth are near perfect, as it's traveled in a semi-hard shell amp case(included) whenever transported. There is some slight tears in the tolex only on the corners of the upper back of the cabinet (see pics). Other than that, it's close to perfect!   If you've made it this far down my lengthy description, you “get” what I've done with this amplifier. If you don’t understand the project or you want a stock one, this amp is probably not for you. Basically what we have here is a fine example of a Marshall 1974X that has been made better by having the tremolo channel (only) modified to the specs of one of the most sought after (and out of production) 18 watt combo amps ever made, the Reinhardt 18 but in a Marshall 1974X! It still has its original non-tremolo channel unmodified for purists. I hate to sell it but I am not using it & am clearing out this amp and a few fine guitars to help fund a vintage car purchase. I have a very reasonable reserve on it & I will gladly return your money (less shipping) if you’re not completely satisfied with the amp. What have you got to lose?  Come on! Buy one!