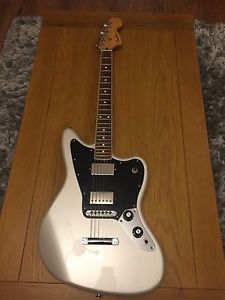 Back to the main page Back to category Electric Guitar

This is an opportunity to own a very rare guitar, only 150 were made and only 30 imported into the U.K. This differs from the standard Blacktop as it has pearl coloured paint and a bound neck. I have read the neck is the same as that from the Kurt Cobain Jaguar and it looks identical to me, somebody online measured theirs with a calipers and confirmed it as identical. The FSR model also had the vintage Jaguar/mustang style knobs but I've changed mine, which I'll explain further below. Don't confuse this with the bog standard silver blacktop guitar this model is superior and extremely rare. You'll need to be spending £1100 min new for a jaguar with a bound neck like this one.
I bought it new in late 2014 (new old stock) and have upgraded the electronics. You'll read about people having muddy sounding pickups on their Blacktops and I found that too. The guitar was an awesome rock guitar but it wasn't a clear driven sound, there was this muddiness about it. Also the tone knob was like a switch, nothing between 0-9 then like a switch between 9-10. I therefore replaced the tone and volume pots for very high quality 500k Seymour Duncan units (& Orange Drop capacitor) and the transformation was incredible. The muddiness was gone and the guitar has fantastic linear tone from treble to bass. Problem was that the Mustang style knobs do not fit the US split shafts so I fitted a pair of skirted knobs which look cool. That upgrade was such a success I then changed the pickups for Seymour Duncan's, a '59' in the neck and 'Duncan Custom' in the bridge, the latter of which sounded worse than the stock Fender pickup, so I dropped that back in and it sounds great. Overall the guitar has the same attitude of the original Blacktop but with a far greater quality sound/clarity/tone overall. The sustain is better than any other guitar I've played. Overdriven it can do classic rock, punk, grunge and into metal territory easily. Great for chunky sounding palm mutes. Clean it sounds amazing and can do jazz and blues no problem, a very versatile instrument. Just to confirm again it has a Seymour Duncan 59 pickup in the neck and the standard Fender high output alnico in the bridge. They match and complement one another perfectly. This is a modern sounding guitar and not a twangy, 'surf' sounding Jaguar, if your after that this isn't for you. Having said that if you play with the tone, drive and guitar volume you'll get just about any tone you like. The guitar is in excellent condition, no marks or dings on paintwork or neck, in fact the only marks I can find (apart from pickguard obviously) are 2 or 3 scratches on the jack plug scratch plate (that's why they call it a scratch plate right?) if that bothered you you could replace for £7.99 or whatever they are new. I have looked after this guitar and it has never been gigged or even left the house. The action is nice and low and it is wonderful to play. This guitar looks, plays, feels and sounds as good as a US made Fender now, IMO. I read somewhere the standard Blacktop Jaguar guitar is one of the best Fenders to come out of their Mexican factory and this particular guitar is a big improvement on that with the bound neck and upgraded electronics. Since this guitar is so rare and potentially valuable in the future I'm including all the parts I've replaced, although the electronics are much lower spec than those fitted. For the avoidance of doubt I'm not providing the (removed) Duncan Custom pickup I mentioned. These guitars did not come with a gig bag nor case so one is not included. I am able to package the guitar for post adequately as I have a proper guitar box. If you love Fenders, love Jaguars, you should buy this guitar, you'll kick yourself if you don't, I doubt you'll ever see another, whereas all those other Jaguars are ten a penny.