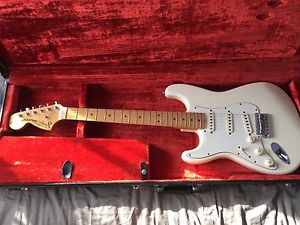 Back to the main page Back to category Electric Guitar

For sale: A left-handed 1997 Jimi Hendrix tribute series Fender Stratocaster and a 20 year old case.Fender serial number: N703460This guitar was brought from new it has always been used in the home. Once a upon a time this guitar was arctic white however, 20 years has passed by and the guitar body has gone a little bit creamer. The guitar was shipped to me strung right handed in 1997. When I first got the guitar I had some work done to the nut to accommodate me playing left handed. The difference between the last pickup and the front pickup can 'ONLY' be described as a rocket taking off! If you are a passionate blues player this is the guitar for you!!Facts about my Fender Jimi Hendrix Tribute Series Stratocaster!1. The guitar was modelled after the same Strat that Jimi used at the Woodstock Music Festival in August of 1969.2. It's the only Fender guitar that has a Maple Cap Body with Maple Neck. Essential to get the Hendrix Tone.3. The guitar has 3 Reverse Staggered-Pole Vintage Single-Coil pickups which are perfect for such Jimi Hendrix classics such as "Wild Thing", "Purple Haze" or "The Star Spangled Banner".4. Between 5'000-6'000 Jimi Hendrix Tribute Series were made between 1997 and 2000. Not much is around anymore with a Worldwide population of 7 billion people. This guitar has been professionally set up on 10's recently and the frets dressed. I do have the original tremolo arm I have never personally use it.* Please note there are age related marks as shown in the pictures.** Please note I will 'ONLY' post within the UK!